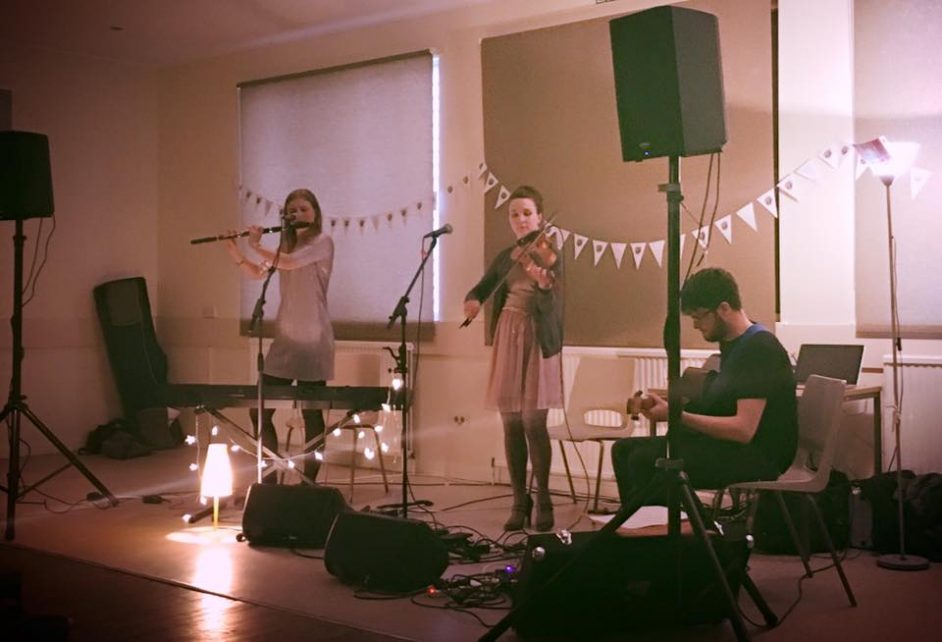 We had an absolutely fantastic time at the first G&T Day on Saturday 21st May. It took place in St Peter’s Hall, Partick, which is a lovely wee space. We had 12 musicians for the workshops which was great. Gráinne started with a class for the 9 fiddles and I had a class with the 3 flutes. Gráinne taught an Irish tune called ‘My Darling Asleep’ and one of her own compositions ‘The Magician’. I taught the flutes one of my own tunes called ‘Pipe Down’.

Then we had a nice tea break after this first workshop with tea, coffee and snacks. We were really lucky to have our friend Jasmin helping out, and she got everything ready for the break which was great.

We split the group for the next workshops; I took half the group for a composition class and Gráinne for a class on building repertoire. The aim of the composition workshop was to show that anyone can write a tune using some simple techniques, and to encourage people to compose. Together the classes wrote two great tunes over the workshops.

The repertoire class involved a talk on the key aspects of successful practice and building repertoire. Gráinne also taught them another Irish tune called ‘The Limerick Lasses’.

After another tea break the groups switched over so everyone took a composition class and a repertoire class which worked out really well.

We then set up the hall for the evening concert. We started around 7.30pm with a fantastic set from fiddler Ryan Young who was joined by Innes Watson on guitar, and a surprise guest appearance from Charlie Galloway on guitar. In the interval we had a raffle, with the star prize being a bottle of Botanist gin. A very lucky lady from the workshops was the winner! We had lots of CDs as prizes as well.

The concert then continued with G&T, with Innes for some of our sets. We played tunes from our new album, HIGH SPIRITS and some older sets from the EP. It was fantastic to have Innes join us and we really enjoyed his playing in Cooking 6/4, as we’ve never had a guitarist play with us in that set before.

We’ve had some brilliant feedback and folk were asking if we are going to do another G&T Day as they enjoyed it so much. We definitely will!

Thank you to everyone who made the day such a success. A big thanks to Jasmin for all her hard work behind the scenes on the day, to Innes Watson for playing with Ryan and us and for bringing the PA and doing the sound, to Ryan Young for his fantastic set, St Peter’s Church for giving us the use of the hall and to everyone for coming along to the workshops and the concert.